As air travel increased in the early 20th century, Butler County responded to the growing enthusiasm for aviation across the country. Railroads and steamships were the main transportation arteries at that time, but air transportation was predicted to be the “highway” of the future.

World War I had shown that aircraft were effective military tools as well as novelty transportation machines. Record-setting aviators like Charles Lindbergh and Amelia Earhart made the words “airplane” and “aviation” common terms of the day.

By 1920, a small landing strip had been created on the outskirts of Greenville, but it wasn’t marked and was difficult for passing pilots to identify. It was simply a dirt strip in a flat field, without trees or other obstructions. There was no manager, and there were no airfield markers or buildings.

Barnstorming pilots and other aviators often landed in harvested/cut fields, for lack of better landing places near Greenville. In June 1920, The Greenville Advocate newspaper reported that the “Keen Kutter” plane had to land in a freshly-cut oat field on D. H. Rouse’s farm. Unfortunately, the soft ground of the field made taking off again difficult for the pilot.In April 1925, another pilot made local headlines when his plane developed fuel trouble and he had to make a forced landing on Henry Rogers’ farm, several miles north of Greenville. The aircraft landing was not exactly a welcomed visit, since Mr. Rogers’ growing young cotton and corn fields were badly damaged.
Repeatedly in the 1920s, the fact that Greenville did not have a municipal airpo 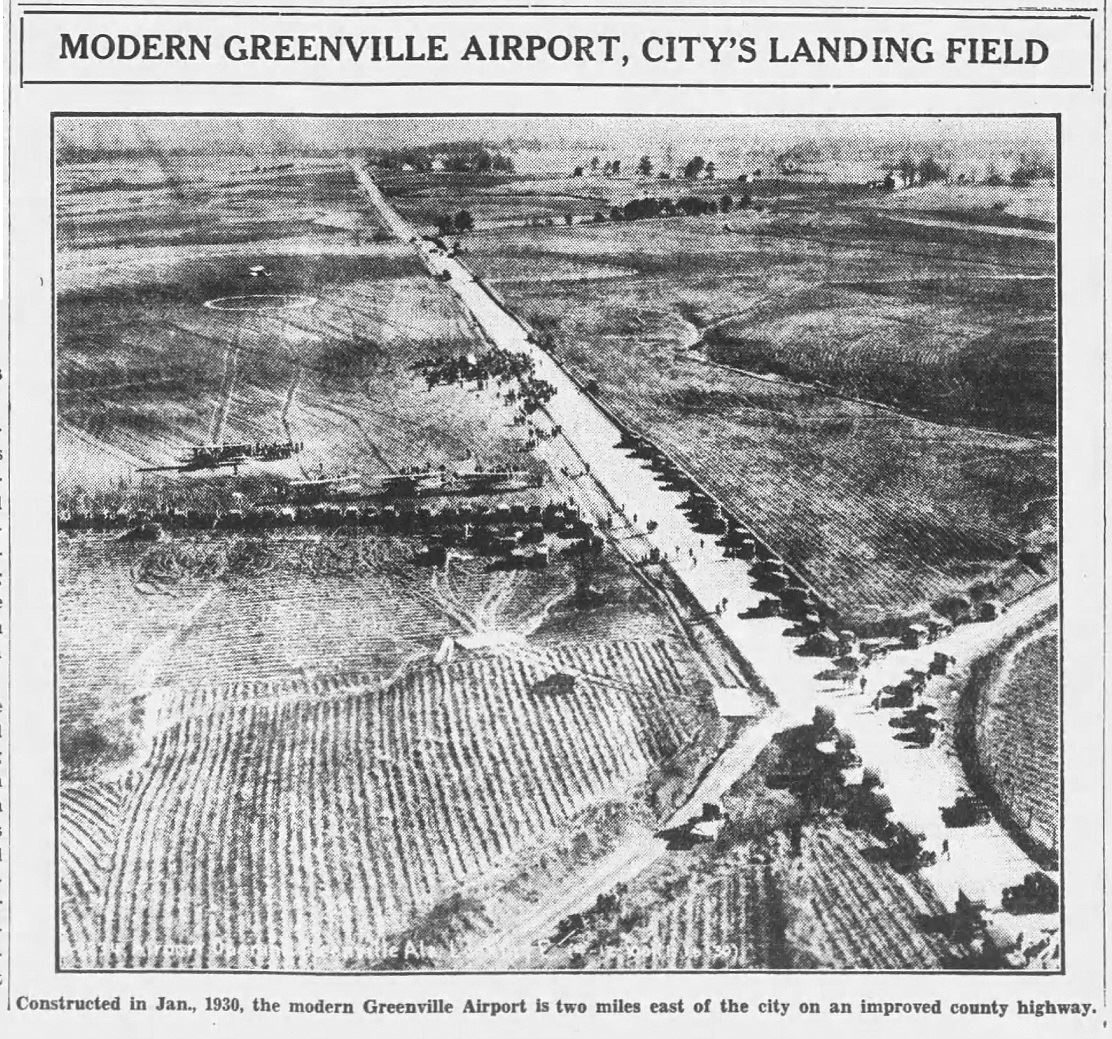 rt was pointed out by progressive-minded residents.
“Greenville is in direct line between Montgomery and Mobile ... An airport is the most necessary step in the progress of Greenville,” wrote The Greenville Advocate’s editor, James B. Stanley, in August 1928.
The stock market crash in October 1929 didn’t delay Butler County’s participation in air transportation. Local leaders were finally building an airport.

Sponsored by the Greenville Lions Club and the city and county governments, Greenville’s first purpose-built airport was constructed on rented acreage on a large, flat tract of land, two miles east of the Butler County court house, on the Luverne Road (today’s Alabama Highway 10). The air field was formally opened in January 1930. Its runway was a graded, leveled and packed dirt strip – a great improvement over the soft-ground of cotton fields and corn fields.To be seen from the air, the airport site was marked with a large circle with a bar in the center, created with white sand and gravel. A wind cone or “sock” was installed, to show wind direction for pilots to make landing and take-off decisions.

Greenville’s small airport of 1930 wasn’t a full municipal/commercial facility, but a flying school was soon in operation, and the landing field became a popular place to spend the afternoon as a spectator or participant. Passenger rides, student instruction, and even parachute jumps were regular events. A contemporary photograph shows five biplanes on the site, with nearly one hundred automobiles and crowds of spectators.

Building an airport, even a small one, puts a location on the map. When the Atlanta-to-New Orleans air mail route was established by the U.S. government in 1930, Greenville was one of the designated emergency stopping points. Every ten miles, landing fields were to be constructed, with guiding lights for government pilots delivering the new “air mail.”
The U.S. Bureau of Air Commerce (later known as the Civil Aeronautics Administration) established and maintained this network of emergency landing fields across the country in the 1930s and 1940s. The intermediate airfields were located at points along designated airways between airports with scheduled airline service, providing pilots in distress with better alternatives than landing on public roads or farmers’ fields. 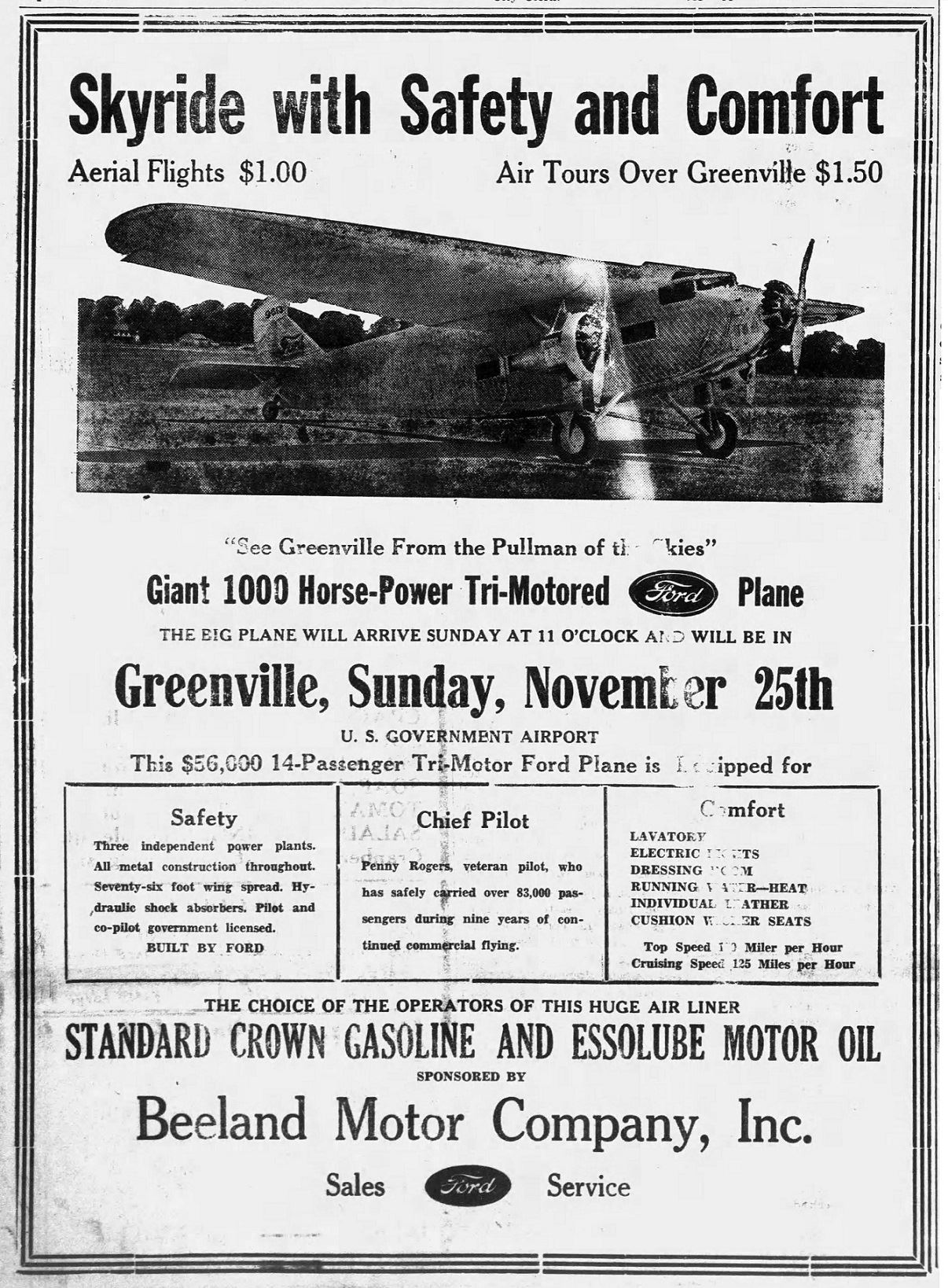 ntermediate fields were used as auxiliary fields or emergency landing fields by the Army during World War II. Their placement along air routes, their infrequent use, and U.S. government ownership made them ideal for use by military aircraft.

This second, larger airport built by the federal government was in a new location: seven miles west of Greenville on County Road 54. By January 1932, a field house with power plant had been constructed at the new airport site. The grass strip had boundary markers and a beacon tower.When the runway lights and rotating beacon were turned on, nearby residents were alarmed by the sudden, strange lights that illuminated the skies. The modern world had arrived!

The government airport served Greenville and the Butler County area through the 1930s and 1940s. Machinist and building contractor Oscar Tillery, a World War I veteran who had served with the 167th “Rainbow Division” in France, was the first airport manager. He held that position for nearly a decade.

Bill Seymour wrote a regular news column, “Hangar Talk,” chronicling the experiences of local pilots and his business, “Flyaway Aviation.”However, air traffic gradually slowed down. Seymour and Horwitt went on to other locations. When there was no energetic site manager or enthusiastic pilot to promote local aviation, people lost interest in the airport. Without traffic and maintenance, Greenville’s airport and landing strip gradually began to deteriorate.

Even with the airport’s drawbacks, Greenville’s location still made it a choice site for a municipal airport improvement and construction project. The town was included on the Alabama Department of Aeronautics National Airport Plan for 1949, making Greenville eligible for state and federal aviation funds.However, a decade later, there was still no updated or new airport. The Alabama Aviation News, published by the Alabama Department of Aeronautics, reported in February 1959: “GREENVILLE: Arrangements pending for construction of a new state aid municipal airport, with 4,000-foot sod strip. Difficulties in securing approved site have delayed project.”
In the 1950s, there was a nationwide decline in the number of airports, private pilot certificates issued, flight schools in operation, and personal aircraft manufactured. As the decade of the 1950s drew to a close, residents concerned about Butler County’s lack of an adequate aviation facility urged public officials to build a better airport. William “Billy” Calhoun, an aerial photographer at Gunter Air Force Base during World War II, obtained details from the Alabama Aeronautical Commission of what financing the state would provide and what the county needed to do to build a facility. Greenville NEEDED an operational airport. 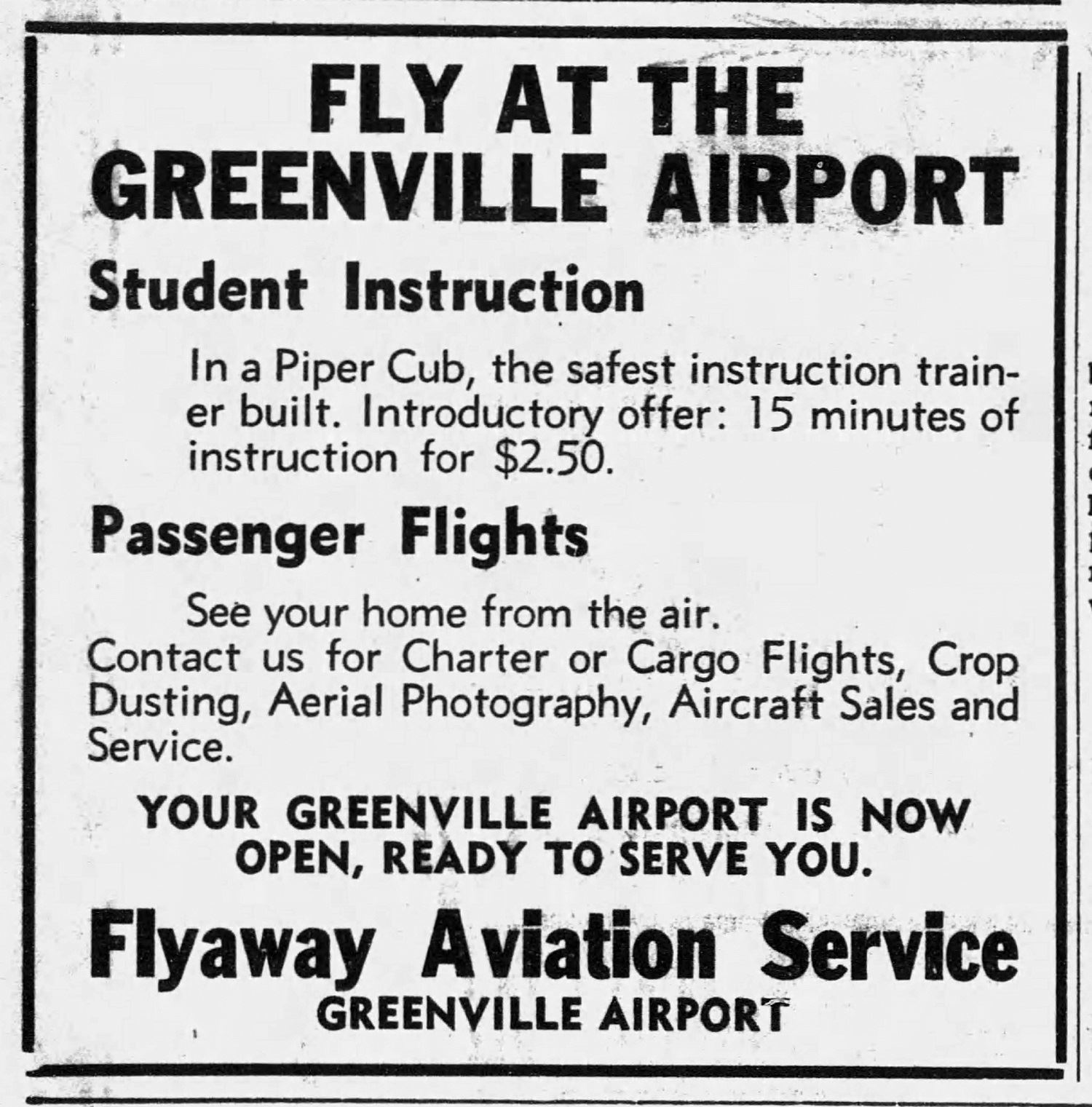 The Beeland estate was willing to sell property on a high plateau northeast of Greenville, within city limits. Billy Calhoun finally gained the support of the Chamber of Commerce, and the airport idea became reality.

In September 1961, the new Greenville Airport was completed. Its long-awaited hard surface runway was welcomed by pilots who had experienced the dirt, grass and mud of Greenville’s previous airports.

Richard Calvin “Mac” Crenshaw took on the job of airport manager. A Butler County native, he had served as a fighter pilot in the Pacific during World War II, and was a licensed flying instructor and skilled mechanic. He was glad to host Greenville’s aviation facility.

Lights were installed at the airport in June 1962, with a grant from the state aeronautical department. Mac Crenshaw and his crew built hangars and a small office, and began to fly planes, repair engines, and give student pilot instruction at the new airport.

In 1964, Mac began writing a column, "Prop Wash," for The Greenville Advocate newspaper. With the help of local pilots, businesses and students, Mac made airport news something interesting to read as he related air traffic events in Butler County for the next three decades. Mac’s business, Crenshaw Flying Service, gave Butler County residents a local source for flying lessons, charter flights, and aircraft repair and inspection.

In 1979, Greenville’s newest airport terminal was dedicated a short distance away from the earlier 1961 tarmac strip. With a lengthened, updated runway, efficient lighting system, modern hangars, increased-capacity fuel tanks, and well-planned office building, it was an enormous improvement over previous airports. It was welcomed by pilots who had seen Butler County’s aviation history begin with cornfields and barnstormers.

Mac Crenshaw operated the Greenville Airport for over 36 years before his retirement and death in 1997. His contributions to aviation and the community were recognized with the airport designated “Mac Crenshaw Memorial Airport” in 1998. The airport manager from 1997 to 2019 was Travis Capps, who also owned the FBO (Fixed Base Operation). Like Mac Crenshaw’s, his aircraft repair service handled aviation maintenance and repair for Butler County and the surrounding area.

In 1999, the city of Greenville began a series of sophisticated electronic improvements at the airport. The installation of an Automated Surface Observing System (ASOS) provided up-to-date weather information such as wind, temperature, sky, dew-point conditions and more at the site.

The runway was extended from 3800 feet to 5500 feet to accommodate corporate jets. A state-of-the-art Global Positioning System (GPS), which lines up aircraft with the runway for safer low visibility approaches, was installed. Complete new pilot-controlled lighting, a parallel taxiway and ramp area increased to twice the size of the previous area, were all welcomed improvements.
Commercial corporations such as new restaurants, hotels, manufacturing plants and other businesses would not be in Butler County without such an air traffic facility. Greenville would not have been chosen as a site on The Robert Trent Jones Golf Trail without an airport, nor would it have automotive satellite plants.

We owe a debt of gratitude to all the pilots, mechanics, city staff, maintenance personnel, businesses and residents who have helped establish, operate, utilize and maintain the Greenville Municipal/Mac Crenshaw Memorial Airport. Aircraft have been flying over Butler County for nearly a century, and the Mac Crenshaw Memorial Airport offers them an excellent facility.

Image #1: news clipping was from The Greenville Advocate issue of March 11, 1931 -- describes the "modern" airport built in January 1930.

Image #2: The "Skyride with safety and comfort" ad, with large image of airplane, was in The Greenville Advocate issue of November 23, 1934.

Inage #3: The "Flyaway Aviation" ad was in The Greenville Advocate issue of December 13, 1945.